Presenting on the panel Anna Lauren Hoffman put together, Imagining Social Justice through the Internet and Beyond, was a great way to start the day! Stine Eckert opened with ‘The haphazard democratic potential of social media’, discussing her research with women blogging in the US and Europe. While she draws on public sphere theory, at the same time she’s critical of it: the metaphor of a ‘sphere’ projects a perfectedness, roundedness, and homogeneity in which everyone participates, which is clearly not the case. Instead, she’s developing a theory of fluid public clusters to more effectively talk about how women shift between different topics in their blogging.

Fluid public clusters are directed towards other publics, not working towards isolation. Things are fluid and messy and change over time, like people’s lives. At the same time, women online can come together quickly around key issues, as seen particularly in the swift emergence of discussions around #yesallwomen and #uoksis (the latter among Black women, particularly in the US).

When Eckert asked bloggers about the democratic potential of social media, most women assessed it as mixed. While bloggers appreciated the ability to publish online, online harassment was a significant issue, and the biggest constraint was: “whose voices get heard?” (and taken seriously). Power hierarchies move online, that space doesn’t remove structural differences.

I followed by talking about some of the problems with limiting our imaginations of social justice to the liberal model of politics: more about that to come!

The next presentation, by Ruth Deller, looked at ‘Imagining the social justice warrior’. Deller noted that the term ‘social justice warrior’ started being used more around 2011/2013, drawing on a similar (but not entirely overlapping) backlash to that seen in the right-wing critique of ‘political correctness’. SJWs are seen by their critics as “people who get offended all the time” who especially like to hang out on Tumblr. Across platforms, there’s often contestation around the term, with some hosting significant anti-SJW content, while others have lots of users posting more positive takes on the term (often tagged with ‘social justice’ rather than ‘SJW’) – Pinterest is the exception, with almost-entirely positive content.

Finally, Gregory Donovan spoke on ‘Empathy and Efficiency on the ‘Smart’ Urban Frontier’, contrasting empathy and effiiency as two contrasting and opposing paradigms in the ‘data driven city’. This work draws on on examples from NYC, including Hudson Yards – previous dockyards set up to attract Google and other companies, as well as those working from them. The developers of Hudson Yards have been working with NYU to set up “the first quantified community”, which Donovan links to a push by ex-NYC-mayor Michael Bloomberg, who has personally made a bunch of money off data-driven industries,to get other cities to ‘find ways to use data’ to make money.

To counter this drive towards ‘efficiency’, Donovan argues for empathy as an ontological stance, calling for a more qualitative and situated approach to urban space. One example of this is the Researchers For Fair Policing project, which has created videos of young Black and Brown men talking about what it feels like to be harassed by the people who are “supposed to be protecting” them.

That session lead on well to the roundtable on Real and Imagined Boundaries: Building Connections Between Social Justice Activists and Internet Researchers. There was a lot of interesting discussion here that I didn’t cover in my notes, in part because it seemed a little challenging to cover the wide variety of speakers. I’m really excited that AoIR is a space where these conversations are happening, though – where people are thinking about how researchers connect with (or fail to connect with) activists in different spaces, what our research is for, and how to use the institutional power of AoIR strategically both inside and outside of academia to provide support to activist projects.

As part of this roundtable, Terri Senft talked about her research with sex workers. She notes that as researchers, we have a lot of complex ideas about what people want or need from us, and we’re often wrong. So far, Internet scholars have been mostly uninterested in sex work, with the exception of online pornography. This is ironic, given that there are lots of porn performers online discussing labour issues in the “tube” model of distribution. But sociology and public health literature (which does look at sex work) focuses heavily on street workers, which is actually a very small proportion of sex work globally. This reinforces ideas of sex workers as objects, rather than subjects – a side economy to visit, rather than integral to the economic structures we’re all working with.

So researchers need to be thinking about how to speak with, rather than to or about, sex workers, and learn from the issues they’re discussing themselves. Researchers also need to deconstruct the mainstream and subcultural fascination with sex work, and instead pay attention to what sex workers want, and what they’re talking about. A large part of this is no longer thinking of people as either “poor, subaltern, unable to speak” others, or “highly-connected” – sex workers are all connected in some way, through their own burner phones, or through others caring for or managing them in ways that involve monitoring their internet streams.

The fishbowl on Engaging with Issues of Social Justice in Higher Education covered similar ground, but focusing much more closely on our complicated position as educators: trying to open space in the classroom for challenging practices and discussions, often while in precarious positions ourselves.

The final session I went to, Governance, opened with work from Francesca Musiani on ‘Plumbing and practices: STS approaches to internet governance research’. This talk recognised the increasing interest in how Science and Technology Studies (STS) can be used to understand Internet governance, drawing on Actor-Network Theory (ANT). Internet governance has primarily been defined by practitioners of international relations, and analysed by political science scholars, but STS can highlight mundane practices that ‘do’ governance, describe governance’s hybrid arrangements and assess their performative role, look at how controversies bring governance elements to the fore, and underline instances where infrastructure is invisible, pervasive, and yet has agency. In doing this, having one precise definition of Internet governance can be a problem (and often impossible) when addressing specific case studies.

Using STS to understand Internet governance can help us to better understand privatization, architecture-embedded politics, technical and political governance(s), communities of practice, and institutions (observed as dynamic, evolving, systems, partially embedded in technological devices). This also leads to thinking about ‘multi-stakeholderism’ in a different light – thinking about hybrid forms, socio-technical assemblages, how stakeholders actually come together, and the intervention of the private sector. Jeanette Hoffman has talked about Internet governance as an ‘idea in flux’ – STS can be a way of recognising and examining this.

The presenter of the next paper, Jean-Francois Blanchette, was absent, due to a new baby (congratulations!) Dmitry Epstein gave a brief overview and encouraged us to look for more detail in Blanchette’s recent publications. The two main points here are that: 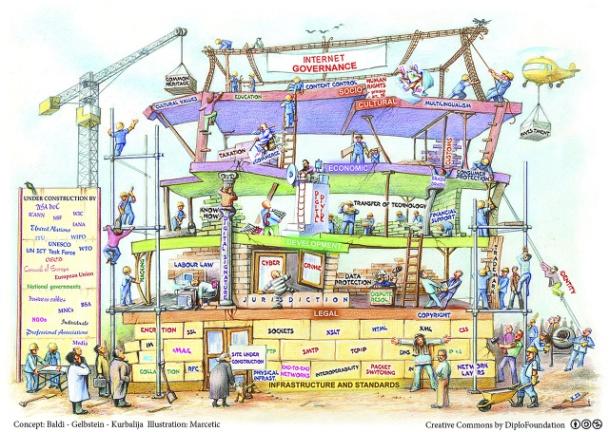 “The Internet governance building”Next, Dmitry Epstein talked about his own work, ‘Duality squared: theorizing internet governance’, looking at the evolving definition of Internet governance. This draws on a close examination of the Internet Governance Forum (IGF) and the multistakeholder model: the IGF makes no binding resolutions, but come together to discuss Internet and policy. Looking at the event, there are two categories of people. The first are celebrities (Vint Cerf, heads of state, etc), who are performing multistakeholderism publicly. And then the second are people who are less visible, the IGF nucleus, who set the agenda, decide which issues and people will get most time.

The IGF nucleus is mostly from a UN or European background (“accidentally” linked to WSIS), persistent (only 39 people and entities that have participated in more than five preparatory meetings), active (making more interventions than others during meetings), dominant (speaking more than others per meeting), socially cohesive (they know each other, sometimes go on vacation together, know each other’s families), and with a focused mobility (people change jobs to allow them to continue setting the agenda for the IGF). These are the people who write legislation, make international agreements, design standards, and it requires a more complex understanding of Internet governance to properly understand their role.

Finally, Laura DeNardis and Andrea Hackl spoke on ‘Internet control points as LGBT rights mediation’, examining how infrastructure and governance arrangements embed particular politics and thinking about different ways in which day-to-day operation of infrastructure governance (control of TLDs, accessibility standards, etc) are co-opted and ‘tampered with’. The basis of this work, as with all of DeNardis’ work, is that arrangements of technical infrastructure are also arrangements of power. This research is trying to go beyond looking at content and Internet use, and how that affects internet expression, to examine instead how conflicts materialise within the infrastructure of systems. This includes Pakistan using the structure of the domain name system to block access to LGBT sites; Santorum asking Google to change their algorithms to help his ‘Google problem’; and the use of Grindr to locate gay men by Al Qaeda. This also requires understanding that Internet infrastructure is frequently privately-held, and exists as actual, material, infrastructure. We also need to look at the ways in which the policies of social media platforms can be significant, and their implications.