In my previous post, I wrote about the growing neonazi movement in Greece and links with the police. However, I also mentioned that there were many signs of resistance to this. This weekend, antiracist and antifascist groups from Greece and around the world will hold a variety of actions that remember the coup which brought the junta to power on 21st April, 1967. I’m trying to put together an overview of some of these events, and I thought I’d share a little of it (perhaps some foreigners in Athens this weekend may even appreciate some English information) – click the pictures for more information (in Greek): [Please excuse any terrible translations, my Greek is struggling with political jargon and slang – feel free to add corrections in the comments, or to suggest other events] 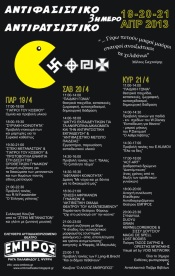 Throughout the weekend, the Embros Theatre in Psirri will host a range of activities. These include documentaries, discussions, and workshops. It’s also great to see that there are many activities for children, especially on the Saturday.

On the 21st, a gathering will be held in Messina Square at 11:00 in the morning.

On the 21st, there will be speeches and a concert in Freedom Park on Vasilissis Sofias Avenue from 5pm onwards.